by Gromit
I haven't been on the forum for ages but recently started work on my Dormobile again.

While installing seatbelts I had to remove the headlining and it really needs replacing. I have to try and find something like the original vinyl covered hardboard in Australia but wondered how it was fitted originally.

Was it bent into place or were the edges damped down and curved in a former before fitting ?

Mine had the original curtain rails removed and some very dodgy ones fitted which I took out. I've sourced Silent Gliss rails etc. and wondered if the rails when screwed into place held the headlining or was the headlining fixed to the timber battens before the curtain rails are fitted.

Any pictures of the headlining/curtain rail installation would be helpful.

I had to pull it out just to get into the driver's seat without my head holding it up!

I'd be interested in any replies from folk who have worked on theirs as I'll need to replace mine when I get around to restoring it.

I know someone replaced theirs with a LaSalle headlining, but they are not cheap

by Dormy
There are a lot of trim pieces involved in fitting the roof lining all around the Dormobile. The 'Silent Gliss' rails and screws are used as part of that fixing where they run around above the windows. The biggest bit of lining is obviously in the front and is locked in place either side by the curtain rails. It is also secured along it's rear edge by the plastic trim which fronts the roof opening. There is a separate piece of trim which fills the gap above the windscreen.

I was lucky, the PO had fitted a roof rack and added some wooden strengtheners inside the roof. The interior light screwed into these and does an excellent job of holding the centre of the roof lining up.

The lining is made of hardboard with a textured vinyl cover. I recall a conversation with Mick Outhwaite (Jabbawocky) who (IIRC) soaked his new hardboard lining in a bath of hot water to allow it to bend to shape. I am sure he will be along at some point to confirm.

by Gromit
Thanks Guys,

I went to a board supplier today and they weren't much help.
Hardboard (Masonite here in Australia) is easy to source but they had no idea how to bend it and get it to stay in shape. Can't get it with the vinyl already attached (I thought it might be something made for caravans) so once formed I need to then attach the vinyl.
There are plywood panels with vinyl attached but they would probably split when bent and would need to be screwed to a frame to hold their shape.

I'm guessing I need to make a former and then either but wetting down or steaming get it to bend then clamp while it dries. PITA job but the headlining needs to be done at some point. It's OK but doesn't look the best and is splitting.

A PO bolted a rack of some sort directly to the front section of the roof and there is a steel brace to take the load to the gutters. There were a couple of screws holding the headlining up to this brace.

by RMS
An alternative, if you are not bothered about originality, is a material glued straight onto the roof.

I've seen it done with DIY campers, and it looks ok, and I think they sell it for van & boat interiors.

The material is like thick felt, but probably nylon rather than wool/cotton, and can be stretched/pushed into place.

Unfortunately I don't know what it is called; it's usually available here at car/Land Rover shows from stalls selling vehicle carpet off the roll.

by RobW
If you talk to any camper fitters they'll be able to sell the carpet-like liner. Just glues straight in, and (over here) it's worth adding some insulation too.

by GMF
Hope these help, Gordon

by Gromit
Thanks Gordon,

Some of the pictures help with working out how the curtail rails are installed (mine had been replaced).
My headlining isn't 'that' bad all things considered but I still need to investigate replacement. Maybe the Australian weather has been kinder to the board ?

Here's an old picture before the headlining was removed. 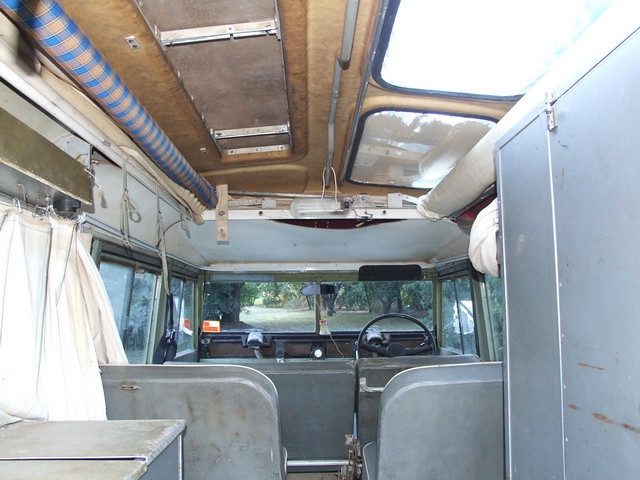 I'm looking at making some formers to shape the Masonite but it looks like the vinyl covering will have to be stuck on once it's bent. I wonder if the vinyl covered board that Dormobile used was an 'off the shelf' product for caravans back in the 60's ?

by jkhackney
Hi,
I'm late to this discussion but I had no headlining at all in front on mine and made my own by guessing.

My only clues were the original wooden battens that you see in GMF's photos, with remnants of the vinyl-covered original trim sandwiched between the Silent Gliss and the battens.

I used 3mm Masonite, which I also sandwiched between the Silent Gliss and the battens. This didn't fit well!! I couldn't wedge the Silent Gliss track back in. 3mm was too thick, should have used 2mm. I had to sand the bottom edge of the headlining thinner to make the Silent Gliss fit again. Anyway, the 3mm headlining is very heavy. I'd still think 2mm would be fine.

I made a pattern for the headlining out of paper and cut the shape out of the Masonite. I bent it by standing the end in the bathtub in about 8" of water. I can't remember how long, maybe check it every hour or so. I rolled the ends by hand around a pipe, gently inch-by-inch, and held the bent shape in place against a wall with the rest of the headlining flat on the floor, weighted down heavily so it didn't move, until it dried. This ensured that the bend ended up 90 degrees. Repeat for the other end.

I used a waterproof vinyl wallpaper for bathrooms and kitchens to get the pebbled texture. The wallpaper uses a special adhesive. You have to apply the wallpaper after you bend the headliner, to avoid wrinkles or separation. After my project, I found that vinyl-covered Masonite is also available to buy. I don't know how well that bends. Bathroom wallpaper and its glue is expensive but the selection of colors and patterns is huge.

For the edge trim, I found a vinyl product at a computer supply store. Apparently it's used to "pimp" the appearance of tuned PC's?

I re-made the entire interior this way. Good luck!